replica rolex watches within the quest for the best style simultaneously an ideal blend associated with resourcefulness distinctive daring style . 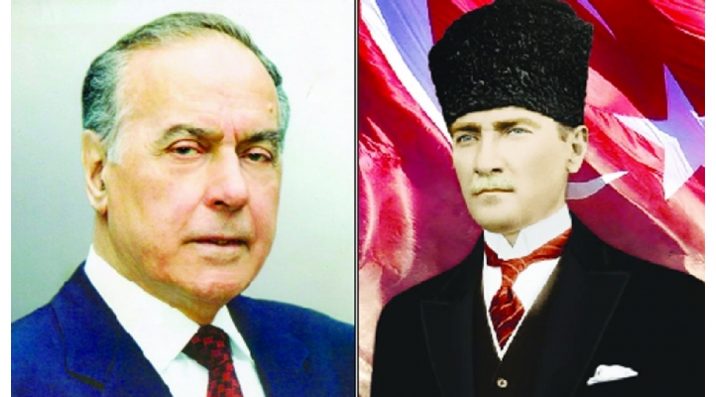 Cooperation with Turkey is at the forefront of the foreign policy of national leader Heydar Aliyev, whose main goal is to establish international relations and mutual relations with the peoples. The Great Leader expresses his respect and esteem for Mustafa Kemal Ataturk, the founder of this state: “Mustafa Kemal Ataturk is a historical figure of the whole Turkic world. He is an irreplaceable, immortal leader of the whole Turkic world.”

It is gratifying that today all Turkic peoples say the same words about national leader Heydar Aliyev, calling the Great Leader an example of wisdom.
The unique way of life, great ideals, genius ideas, struggles for the Motherland, sacrifices in the field of state building of the two luminaries of the Turkic world are among the deeds that serve to strengthen the unity and solidarity of the Turkic peoples. “Ataturk’s personality, the Turkish Republic he created is an example for me,” said national leader Heydar Aliyev.

Mankind has produced great people who have made historical revolutions, created states, and provided certain services to their nations. However, their names did not leave their mark on the history of the nation or state to which they belonged. Probably, their work was not calculated for the distant future. However, like Mustafa Kemal Ataturk, Heydar Aliyev’s legacy is as valuable today as it was in the past, and will live on tomorrow. When we look at history, it becomes clear once again that both geniuses, who were born in different years but had a similar fate, whose fathers had the same name, who were the children of their parents in Alirza, who spent their meaningful lives for the unity and solidarity of the Turkic world. – The phenomenon of  Heydar Aliyev, their wills still form the basis of the idea of ​​Turkism.

Mustafa Kemal Ataturk foresaw the future of the Turkic peoples on the world map with great foresight: “Today, the Soviet Union is our friend, neighbor and ally. We need this friendship. But no one can determine today what will happen tomorrow. Not only like the Ottomans, but also like Austria-Hungary, it can be divided and reduced. Today, the nations they hold in their hands can flee from their neighbors. The world can move to a new balance. Then Turkey must know what to do. Under the leadership of this friendship, we have brothers with one language, one religion and one essence. We have to be ready to own them. ”
The same wisdom is felt in the policy of  Heydar Aliyev, distinguished for his historical services to the unity and solidarity of the Turkic peoples: “In 1991, in connection with the collapse of the Soviet Union, Azerbaijan restored its state independence. In other words, Mustafa Kemal Ataturk’s foresight is proved by this. He saw then that Azerbaijan and other Turkic-speaking peoples – the peoples of Central Asia – will not always be enslaved, they will achieve their independence, their freedom. ” The beliefs and goals of both luminaries of the Turkic world are aimed at the same goal and purpose: to preserve the spiritual bridges, to return to our roots, to unite in our history, which is divided from time to time by imperial policy, to unite, protect and preserve our common values.

Just as Ataturk saved Turkey’s future from the attacks of the Allies in difficult years, Heydar Aliyev protected the independence of Azerbaijan from the influence and pressure of our internal and external villains.

Today, one of the most important areas of Azerbaijani-Turkish cultural and spiritual relations, the results of which are clearer, and perhaps the first, is education. National leaders of both countries Mustafa Kemal Ataturk and Heydar Aliyev recommended that universal values, national and moral values ​​of the Azerbaijani and Turkish peoples should be mastered by every youth, young people should be educated in the national spirit, on the basis of national and spiritual values. They have always promoted the need for the younger generation to know their history, native languages, national traditions and national values. It is the result of the right policy pursued by them that the Azerbaijani-Turkish relations in the field of application of moral and spiritual values ​​in the education of the young generation are gaining a great pace of development.

The political activities of two great personalities of the Turkic world – Mustafa Kemal Ataturk and Heydar Aliyev – have many similarities. Their far-sighted policy not only served the establishment of an independent state and the well-being of the people, but also connected the two brotherly countries. Mustafa Kemal Ataturk’s words “Azerbaijan’s joy is our joy, our sorrow is our sorrow”, great leader Heydar Aliyev’s words “We are one nation, two states” form the basis of today’s unity of both countries. This policy, which is being successfully continued today, connects our countries with indestructible wires.

Heydar Aliyev also worked hard to expand and strengthen economic, political, literary and cultural ties between the Turkic-speaking countries. His name is mentioned together with Mustafa Kemal Ataturk, one of the most influential personalities of the whole Turkic world.

Those who say that geniuses like national leader Heydar Aliyev, who wrote a historical chronicle with his private life, far-sighted and wise policy, grew up once in history, are not mistaken. Declaring that he was the leader not only of the Azerbaijani people, but of the Turkic world as a whole by organizing the Congress of World Azerbaijanis, the Great Leader united the Turkic states for the same goal and thus carried out a historic mission to improve the idea of ​​Turkism.
In his speech at the Second Congress of World Azerbaijanis, President Ilham Aliyev noted that the process of organizing our compatriots began at the initiative of the Great Leader. Heydar Aliyev’s policy is continued in Azerbaijan in all areas. Our foreign policy is very successful and very active. We have been able to maintain very good relations with neighboring countries, we are strengthening them, and this is very important for our development.”

Of course, in this geography of friendship, joint development and cooperation with the Turkic peoples is and will be of great importance. Demonstrating that he stood at the service of the people in a very difficult period, Heydar Aliyev realized that many politicians could not and could not, and always took his rightful place among the famous politicians of the XX and XXI centuries with the ability to respond to the most pressing challenges of the modern world. Heydar Aliyev, one of the rare statesmen of our people, has always thought of his people and homeland during his stormy life. His heart beats for the strengthening of Azerbaijan’s independence and the happiness of its people.

Thanks to the unique qualities bestowed on him by nature, Heydar Aliyev, as a far-sighted person, foresaw the course of historical events, resolutely affirming his true patriotic position when making decisions of great importance. Heydar Aliyev’s oratory skills attracted attention as a clear expression of the depth and breadth of his philosophical and political worldview.

The great leader Heydar Aliyev was a great philosopher and thinker of his time. The philosophy of Azerbaijanism formed and developed by him defined the special role and service of Azerbaijan in the modern world, strengthened the foundation of our national statehood, created a solid foundation for the solidarity of Azerbaijanis and Turkic states.

Thanks to his brilliant political intellect and talent, Heydar Aliyev created a new Azerbaijan, its present realities and wisely determined the parameters of the path to the future. Given the most exciting episodes in world history, the return of Heydar Aliyev to power can be assessed as natural and natural. Because in the history of all nations, there is an instinct to unite in the face of the most difficult test and to show its greatest strength against danger. As a rule, on the eve of an unavoidable real threat, this instinct mobilizes all sections of society, regardless of their political views, in a last-ditch effort to unite around a single hope. Again, as a rule, the only hope is the wisest person in society, and the mass mobilization of society around a wise person becomes a decisive force.

Azerbaijan-Turkey cultural relations, founded by Heydar Aliyev at the present stage, have been developing at a higher pace recently, as evidenced by the measures taken at the level of heads of state and government, cooperation between societies and diasporas.